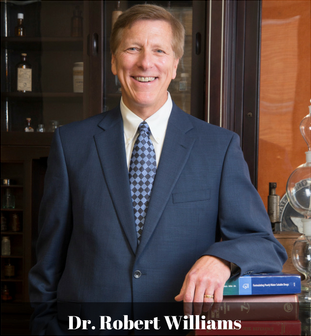 2017 Emerging Inventor of the Year 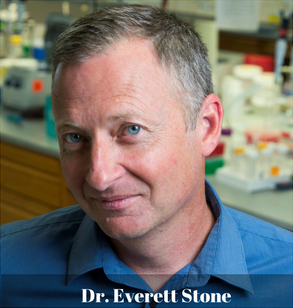 ON THURSDAY, NOVEMBER 2, 2017, Dr. Robert Williams was named 2017 Inventor of the Year and Dr. Everett Stone as the 2017 Emerging Inventor of the Year at the 7th Annual Inventor of the Year Ceremony & Reception. Business, technology, and industry leaders from around the Austin area joined with The University of Texas community to honor the inventors. Also recognized were UT Austin researchers with FY 16-17 U.S. patents issued. 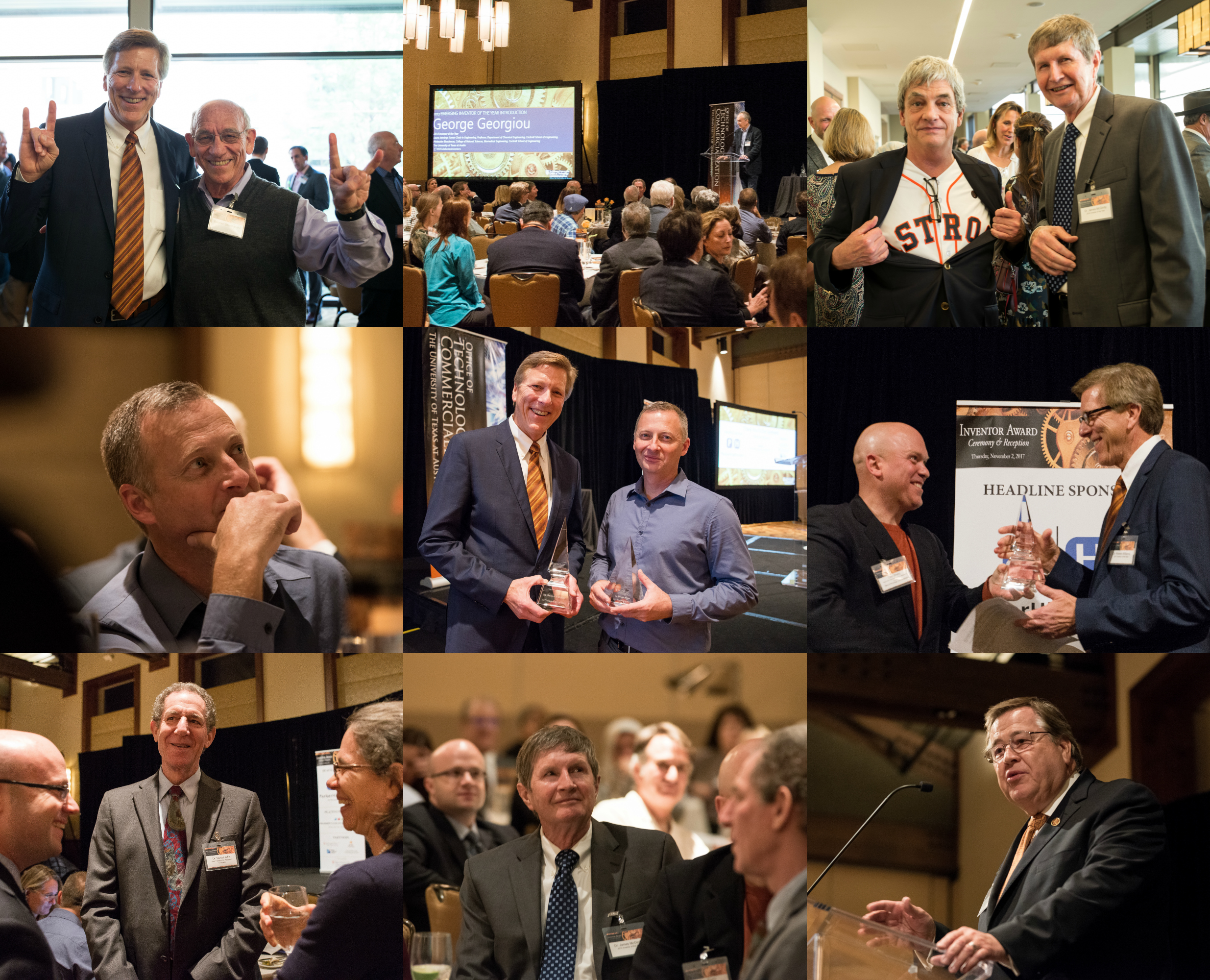 At The University of Texas at Austin, our purpose is to unlock potential. And this purpose inspires us to transform. To create. To invent.

Tonight, we honor two UT Austin faculty members who have dedicated their lives to discovering the unknown, the unexplored and the unimagined.

Our first honoree is Robert “Bill” Williams, who is awarded the prestigious Inventor of the Year Award. He is the Johnson & Johnson Centennial Chair and Division Head of Molecular Pharmaceutics and Drug Delivery at the College of Pharmacy. Bill is an inventor on numerous patents, he is the co-founder of several startups, and nearly all of his inventions have generated interest in the private sector. He has developed more efficient ways of delivering pharmaceutical drugs and designed groundbreaking new biotechnologies for the benefit of patients and healthcare professionals.

The Emerging Inventor of the Year Award is Everett Stone, research assistant professor in Molecular Biosciences at the College of Natural Sciences. He has co-founded several startups and is an inventor with issued patents. His research has focused on metabolism in health and disease, and he has invented, and co-invented drugs that have created new treatments for cancer patients.

Bill and Everett’s visionary work helps define UT Austin as a leader in research and innovation. Their inventions look to the future, while providing value to solve the problems of the present day. They enable progress. They change the world.

Dr. Robert Williams is the Johnson & Johnson Centennial Chair and Division Head of Molecular Pharmaceutics and Drug Delivery at the College of Pharmacy, The University of Texas at Austin. Research interests of Dr. Williams include development of novel drug delivery systems for oral, pulmonary, nasal, injectable, buccal and topical administration; development of novel particle engineering technologies for low molecular weight drugs, peptides and proteins; and analytical technologies to characterize actives, excipients and polymers.

Dr. Williams has been a member of the American Association of Pharmaceutical Scientists (AAPS) since its inception, as well as other professional societies. Additional highlights from Dr. Williams’ career include: he has published over 400 peer-reviewed research articles, reviews, abstracts and book chapters, and he has co-edited two books in the fields of pharmaceutical technology and drug delivery, including Formulating Poorly Water Soluble Drugs, Second Edition (AAPS Press and Springer).

Dr. Williams is the Editor-in-Chief of “AAPS PharmSciTech” (an official journal of AAPS and Springer Nature) since 2014 and was the Editor-in-Chief of “Drug Development and Industrial Pharmacy” (Taylor & Francis) from 2000 to 2014. Currently, Dr. Williams is on the Editorial Advisory Board of “The Journal of Drug Delivery Science and Technology” (Elsevier), and he serves as reviewer for numerous other journals. He earned a B.S. in Biology from Texas A&M University, a B.S. in Pharmacy from UT Austin and Ph.D. in Pharmaceutics in 1986 from UT Austin. Dr. Williams worked 9 years in the pharmaceutical industry in the United States and France before returning to UT Austin in 1995.

Dr. Everett Stone is a research assistant professor in the Department of Molecular Biosciences at The University of Texas at Austin.

His research efforts focus on the engineering, design, and pharmacological optimization of enzyme therapeutics that can effectively target and degrade small molecule metabolites of importance to diseases caused by inborn errors of metabolism and in cancer. Using directed molecular evolution coupled with high throughput genetic selections and screening strategies, Dr. Stone’s group has successfully engineered several therapeutic enzyme technologies that are advancing to the clinic, including an engineered human Arginase for cancer therapy and for treatment of hyperargininemia.

While working with Dr. George Georgiou at the University of Texas at Austin, they realized that engineered human enzymes could be an ideal therapeutic modality for eliminating disease enabling small molecules in patients. Dr. Stone’s subsequent innovations in this area have led to seven licensed technology suites, with the most advanced therapeutic currently in three Phase I clinical trials.

Dr. Stone is scientific co-founder of two biopharmaceutical startup companies where he serves as consultant in the clinical development of therapeutic enzyme technologies; Aeglea Biotherapeutics, the first therapeutics Venture Capitalist (VC) funded company in Texas to come out of UT Austin, and Kyn Therapeutics, which secured a $28 million Series A financing round from top VCs in 2016. 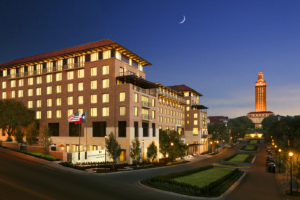 The AT&T Executive Education and Conference Center is located downtown on the northwest corner of Martin Luther King Boulevard and University Avenue, at the south entrance to The University of Texas at Austin. The Center is four blocks from the Texas State Capitol and eight miles from Austin-Bergstrom International Airport.

Stay on MLK past IH-35. You will notice the University of Texas campus on your right and the Texas State Capitol on your left. The Center will be on your right, just past the Blanton Museum of Art and the Bob Bullock Texas State History Museum. 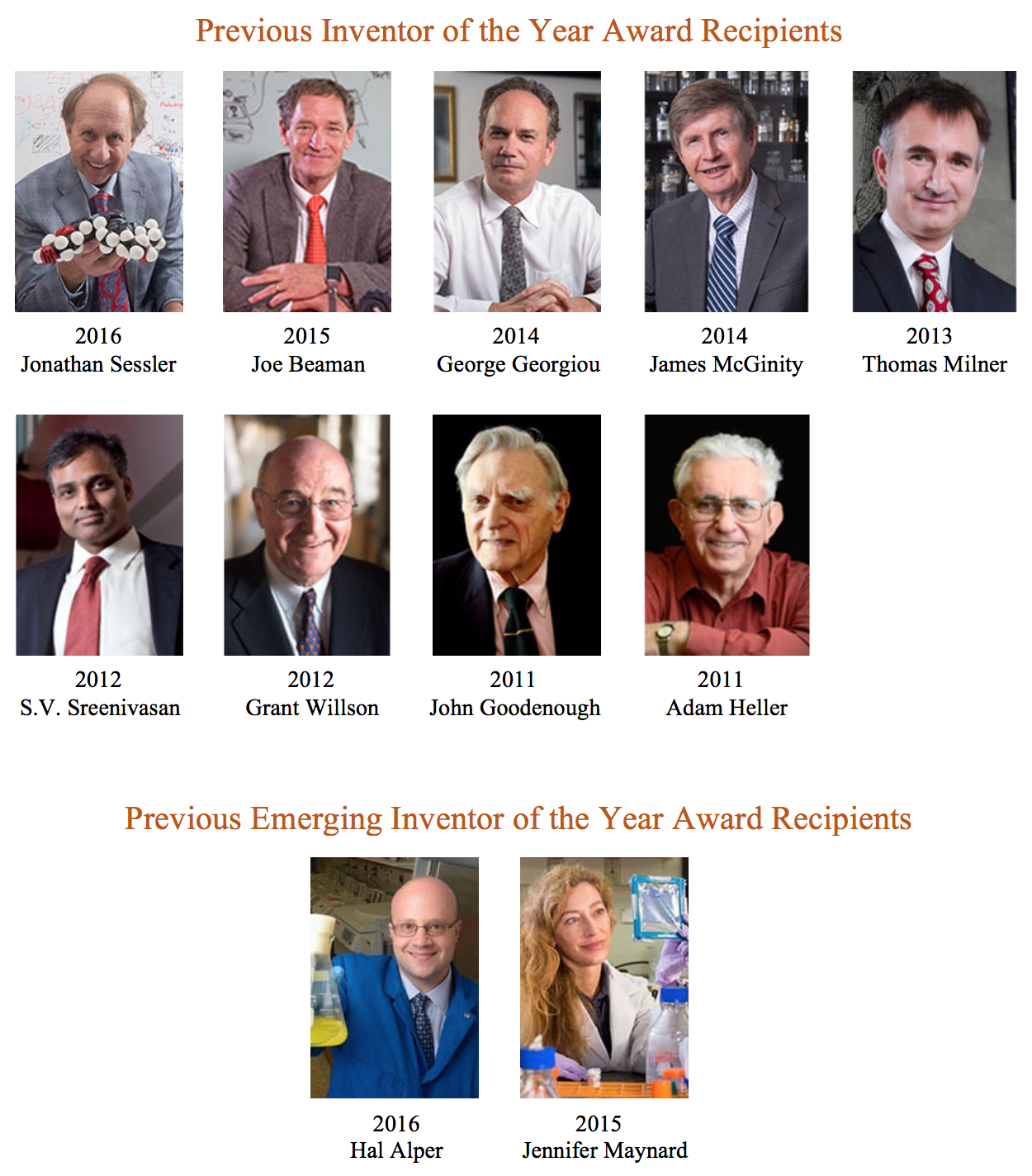 Inventor of the Year Ceremony & Reception

Each year, the Inventor Award Ceremony & Reception recognizes UT Austin researchers who excel in their field and are making life-changing discoveries in the university’s labs and research centers.