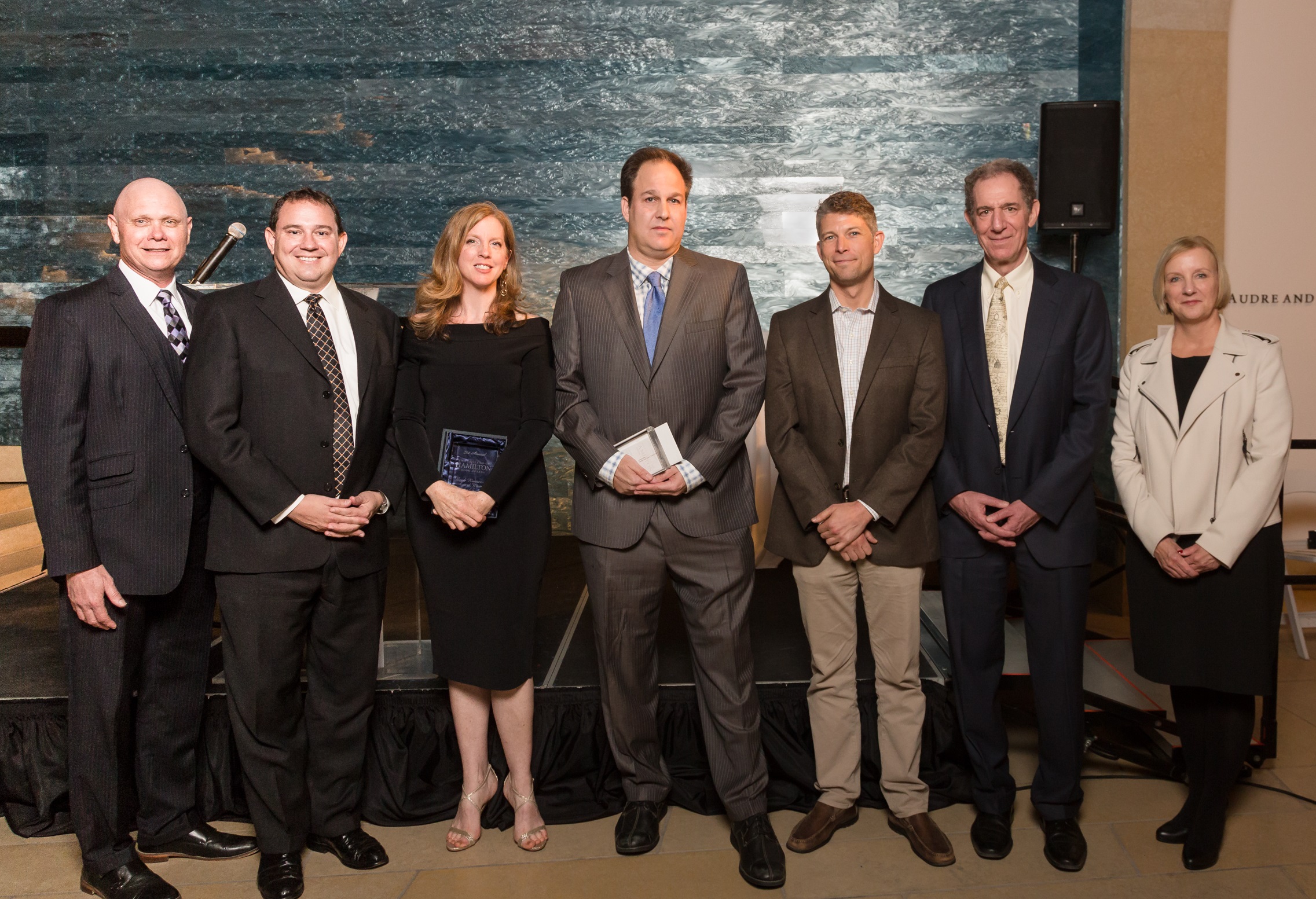 We are pleased to congratulate the winners of the 2017 Robert W. Hamilton Book Awards and the 2017 University Co-operative Society’s Research Excellence awards.

“Each year, scholars from across the university produce an amazing array of books that demonstrate the quality and productivity of our faculty, researchers, artists and scholars,” said Dan Jaffe, vice president for research at The University of Texas at Austin. “The Hamilton book awards recognize a select group for the very best output in a given year. I congratulate both our outstanding awardees and all the impressive authors who submitted their work for consideration in this year’s competition.”

The $10,000 Grand Prize Hamilton Award is the highest honor for literary achievement given by the university to UT Austin authors. The awards are named for Robert W. Hamilton, the Minerva House Drysdale Regents Chair-Emeritus in Law, who served as chairman of the board of the University Co-op from 1989 to 2001.

This year’s Grand Prize Winner is:

Prior to clerking for U.S. Supreme Court Justice Thurgood Marshall, Jordan Steiker had not given the dealth penalty much thought. After working for the only justice who had actually represented defendants, it became the focus of his career and a lifelong collaboration with his sister Carol, who clerked for Marshall two years earlier. Together they have made the death penalty their vocation, as reflected in “Courting Death: The Supreme Court and Capital Punishment” (Harvard University Press), Grand Prize winner of the 2017 University Co-op Robert W. Hamilton Book Award.

Jordan Steiker is the Judge Robert M. Parker Chair in Law and director of the Capital Punishment Center at the UT School of Law. He has taught constitutional law, criminal law and death penalty law at UT Austin since 1990. His work focuses on the administration of capital punishment in the United States, and he has written extensively on constitutional law, federal habeas corpus and the death penalty. Professor Steiker has testified before state legislative committees addressing death penalty issues in Texas. He co-authored the report (with Carol Steiker) that led the American Law Institute to withdraw the death penalty provision from the Model Penal Code. Steiker has also litigated extensively on behalf of indigent death-sentenced inmates in state and federal court, including in the U.S. Supreme Court. 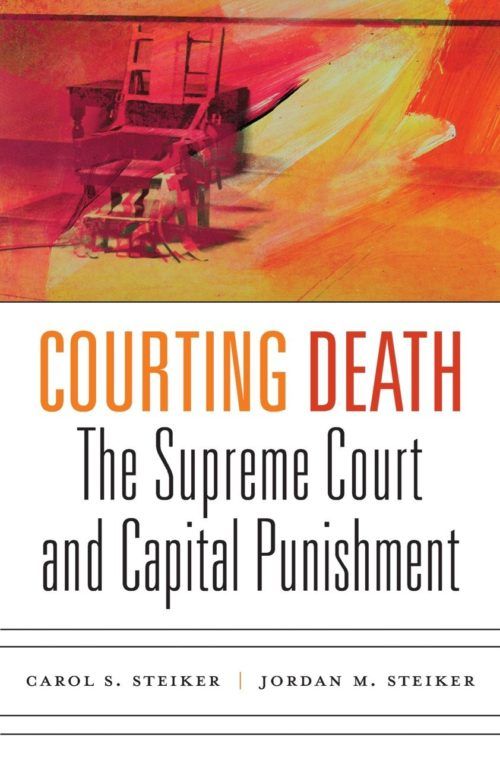 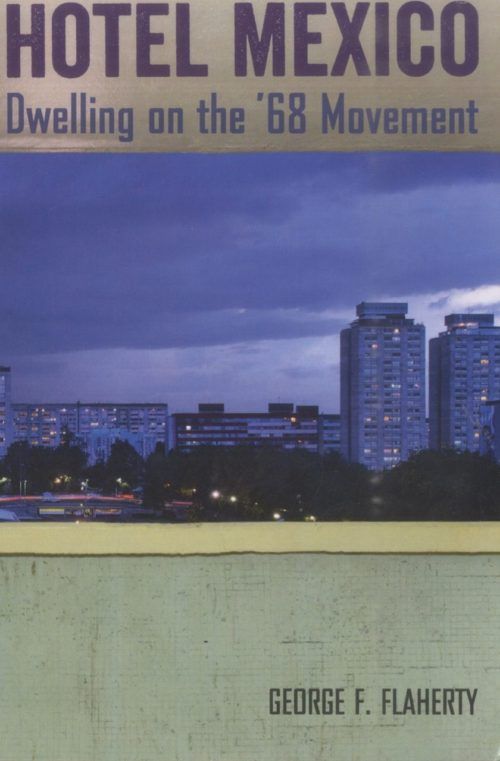 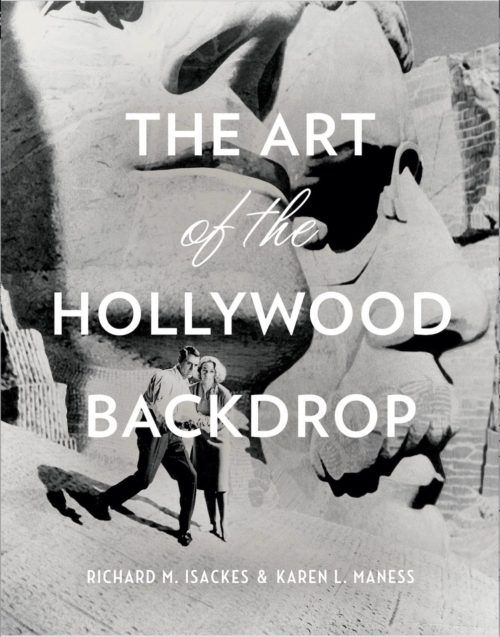 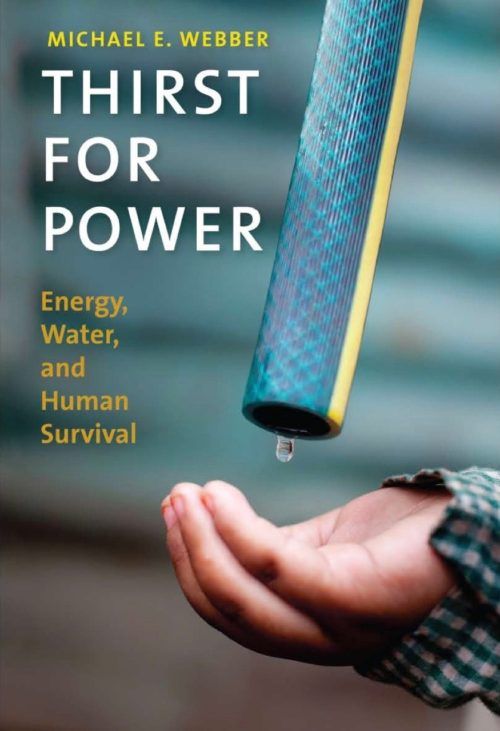 Mary Wheeler received the $10,000 Career Research Excellence Award for her achievements in the advancement of modeling subsurface flows and parallel computation. She is a world‐renowned expert in computational science and a member of the National Academy of Engineering and the American Academy of Arts and Sciences. She is director of the Center for Subsurface Modeling in the Institute for Computational and Engineering Sciences, the Ernest and Virginia Cockrell Chair in Petroleum and Geosystems Engineering, and she holds positions in the Department of Aerospace Engineering and Engineering Mechanics. Wheeler has published more than 300 technical papers and edited seven books; she is currently an editor of five technical journals. 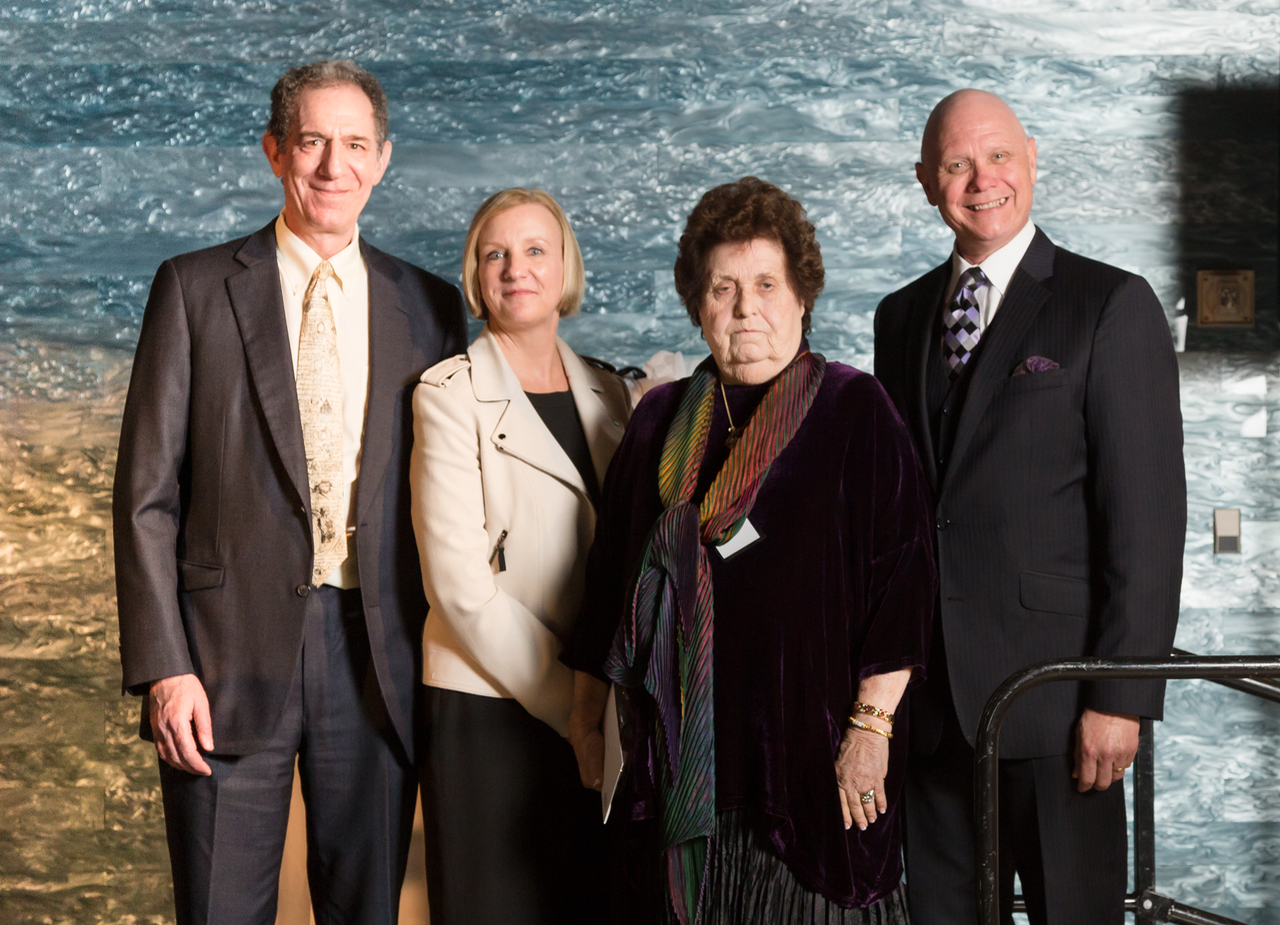 Abigail Aiken, assistant professor in the LBJ School of Public Affairs, received the $3,000 Best Research Paper Award for her work, “Requests for Abortion in Latin America Related to Concern about Zika Virus Exposure,” published in The New England Journal of Medicine. Aiken brought together a multidisciplinary team to produce the research as the virus was exploding in Latin America, providing key knowledge at a critical time. 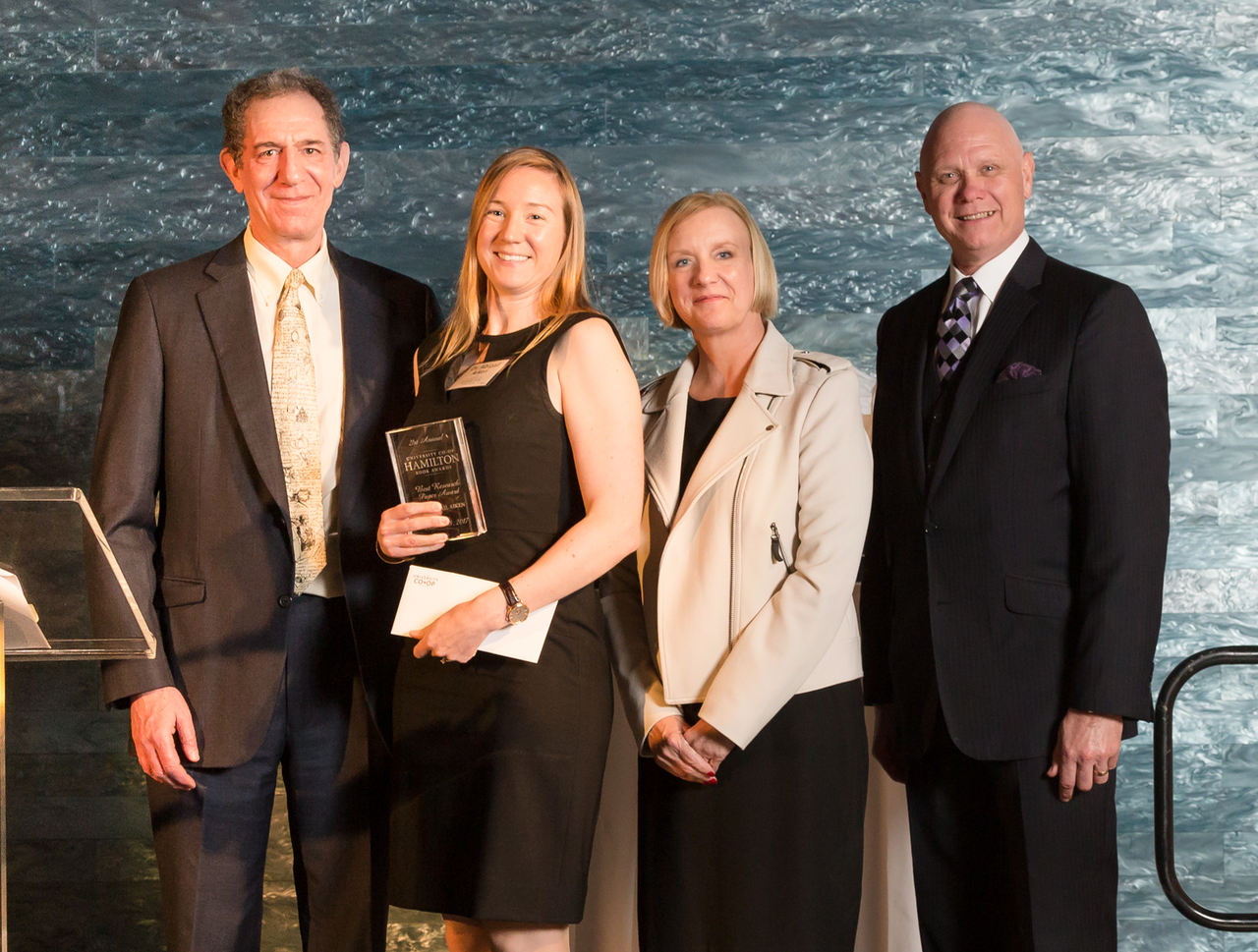 Nancy Schiesari, professor in the Department of Radio-Television-Film, received the $3,000 Creative Research Award for her war-time documentary “Canine Soldiers and the Militarization of Love.” The documentary focuses on military working dogs and their handlers. She has served as director of photography on more than 30 documentaries and films. 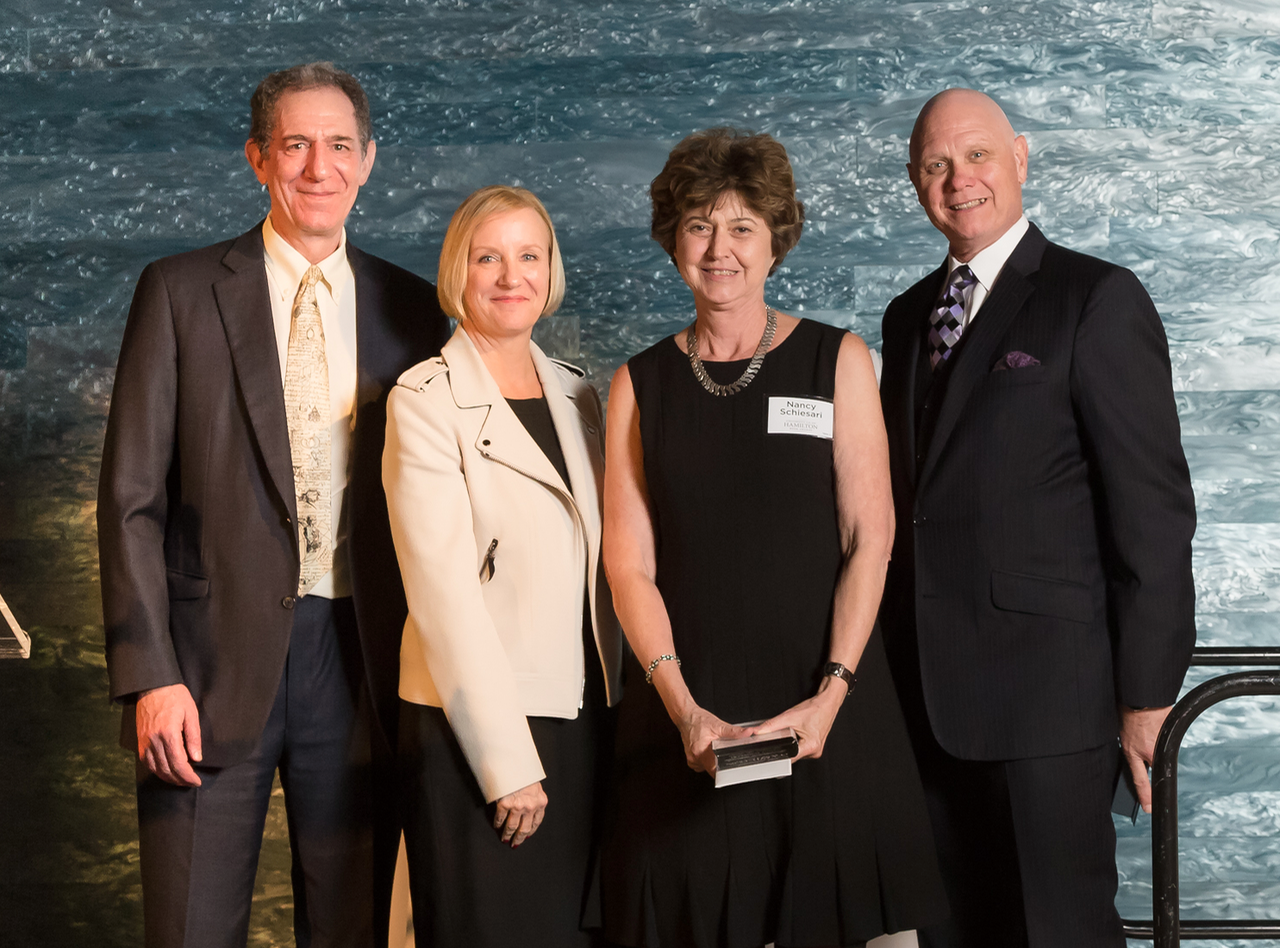 Our sincere appreciation goes to the review panel of former winners and other faculty who, with dedication, enthusiasm and aplomb, selected this year’s winners. Kudos as well to all nominees, for the remarkable work submitted for consideration.

All winners and nominees were honored at the University Co-op Hamilton Awards banquet at the Blanton Museum of Art on Wednesday, October 18, 2017.